Returning The Power To Heal

For cancer survivors, there is often a quest for a new normal—a daily way to manage the long-term physical and emotional effects of going through a life-altering disease and its treatment. Different people will face different challenges on this path, and some of those obstacles may not emerge for months or years later. Patients who were treated with radiation therapy, for example, may someday find themselves needing treatment for soft-tissue radionecrosis. 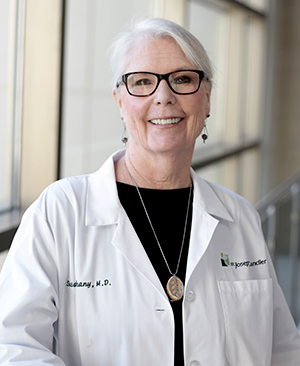 “Radionecrosis is the result of damage to either soft tissues or bone caused by ionizing radiation during the course of radiation therapy,” says Susan Mahany, MD, Medical Director of St. Joseph’s/Candler’s Center for Hyperbarics and Wound Care in Savannah.  “The tissue becomes ischemic, meaning that its blood supply is decreased, and it sometimes becomes necrotic or dead tissue.”

The decrease in small blood vessels caused by radiation injury can result in an area of thick, fibrous tissue that cannot receive sufficient oxygen.  Thomas A. Donohue, MD, Medical Director of St. Joseph’s/Candler’s Center for Hyperbarics and Wound Care in Hinesville, GA, and Moss Creek Village in Bluffton, SC, likens the tissue to an arid landscape.

“I explain it to patients this way: if healthy tissue is like a jungle…meaning vibrant, lush, and really alive…then radiation will change that skin to something more like an African savanna,” Donohue says. “It’s alive, but much drier and less vibrant.”

Soft-tissue radionecrosis is not the same as an acute radiation burn. The damaged tissue may not cause a problem until years later.

“Everything may be fine initially, but over the years, the cells in that tissue become less healthy,” says Donohue. “There is more scar tissue and less blood flow. The cells may die off faster. When these areas are wounded, they may fail to heal.”

Other conditions that can develop from radiation injury include hemorrhagic cystitis (bleeding and pain in the bladder), radiation proctitis (damage to the colon resulting in bleeding and other symptoms), and osteoradionecrosis (the death of bone tissue, typically in the mandible in the treatment of head, neck, and oral cancers). Drs. Mahany and Donohue also see patients with breast flaps that have been compromised by radiation therapy.  Since these conditions share a common cause, it’s not surprising that they share a solution: hyperbarics.

What is Hyperbaric Treatment?

When a wound does not respond to traditional wound care treatment, hyperbaric oxygen therapy may be needed. With this technology, patient lie in a chamber breathing 100 percent pure oxygen, allowing their blood plasma to carry 15 to 20 times the normal amount of healing oxygen to the body’s tissue. The oxygen-enriched blood also enhances the function of white blood cells and encourages the development of new capillaries, aiding in the wound healing process. Along with radionecrosis, hyperbaric treatment also treats burns, diabetic ulcers, and other chronic non-healing wounds. 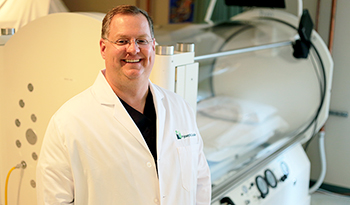 With hyperbaric treatment, new blood vessels develop in the damaged area in a process called angiogenesis.  This process in turn promotes tissue healing.

“When saturated with oxygen in the hyperbaric chamber, over time the body builds new blood vessels to get more oxygen, nutrition, basically more soldiers to the fight,” Dr. Donohue explains. “The area now has new highways of blood flow and all the benefits come with it—healthier cells, less scar tissue, and an improved tissue bed. So the bleeding in the bladder stops or the compromised breast flap is healed, and that healing should be sustained.”
The physicians do concede that hyperbaric treatment for radionecrosis involves a serious time commitment, with a minimum of forty treatments, five days a week for about two hours each day.  But the treatment is the only intervention that has been shown to increase the amount of blood vessels in tissue damaged by radiation.

“Obviously, radiation therapy is a very important cancer treatment,” Donohue says. “But if it leads to complications from soft-tissue radionecrosis years later, hyperbarics can help. We can’t make the tissue bed like a jungle again, but we can make it healthier and more vibrant.”