Pain In The Neck

Degenerative disc disease occurs with age and other factors, and in some cases requires surgery

If you remember being young and proudly singing, “Talkin’ bout my generation,” you may find yourself these days talking more about your degeneration. Or rather, the degenerative disc disease that is causing pain in your neck and back.

Degenerative disc disease occurs when the discs between the spine’s vertebrae begin to break down by either losing fluid and shrinking or developing cracks or tears. The discs work as the spine’s shock absorbers and helping it to flex and bend, but now they can’t do their job as well. This often, but not always, causes pain, which can range in severity from a nagging pain to one that is disabling.

Aging is a factor in the development of degenerative disc disease, but not the only one.

Neurosurgeon Nicolas Arredondo, MD, thinks of the condition (which is sometimes generically referred to as spinal arthritis by patients) in terms of genetics, choices, and luck.

“The connective tissue for some people can be more prone to wearing and failing than for the average person due to their genes,” Arredondo says.

Choices can influence lifestyle factors, such as obesity, physical fitness, and activities or careers.

“For example, football players have a very high rate of neck and back injury, and the joint disease that accompanies that,” Arredondo says. “They may not feel it when they are 18, but by the time they are 40 or 50, it is very common.  And some of the worst spines I see belong to long-haul truck drivers, who spend the vast majority of the day in a seated position that applies force to their spines continuously, followed by a short burst of hard physical exertion while unloading.”

Studies of degenerative disc disease have also uncovered an unexpected culprit, and it’s one with an already-bad reputation: smoking.

“Of the controllable factors that negatively influence the development of this disease, smoking is one of the biggest,” says Arredondo.  He adds that chewing tobacco is also a factor.

Sometimes, though, Dr. Arredondo concedes that this condition can be a case of bad luck.

“Some people make all the right choices and have good genes, but a car accident, a fall, or really any kind of injury can lead to degenerative disc disease down the road,” he says.

“The body, fortunately much of the time, is capable of healing impressively,” Arredondo says. “So with this condition, we recommend starting with conservative therapy. This could include physical therapy, medication, and pain management. Some people may benefit from chiropractic care as well.”

Dr. Arredondo reserves surgery for patients who are at a high risk of injury or if their condition is not self-resolving.  Procedures may involve removing bone and ligament to remove pressure on the nerves or joining vertebrae together where a joint has completely failed. For Dr. Arredondo, the most exciting development in surgical treatment of this disease is a procedure known as disc arthroplasty.

“With a disc arthroplasty, the degenerated disc is replaced with an artificial one, a mechanical device that allows us to treat the symptoms of the disease without sacrificing motion,” he says.

The disc arthroplasty is not appropriate for everyone with degenerative disc disease, but Dr. Arredondo says that the artificial disc works well for those who are candidates.

“I think it’s a very effective treatment for younger patients and patients who are active,” he says.

Not Always A Pain In The Neck 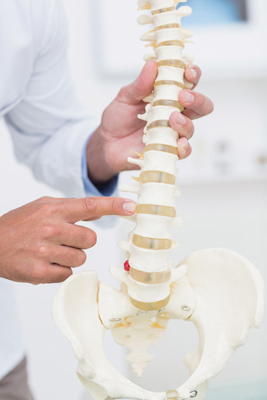 Some patients may not seek treatment for the degeneration occurring in their spine because they don’t feel any pain from it.

“As our population ages, it is becoming increasingly common that people are developing symptoms of myelopathy, in which the spinal cord itself is being compressed,” Arredondo says. “But this does not always cause pain in the neck. Rather, the symptoms are not specific to neck disease. The person may become dizzy, lightheaded, clumsy, or may feel numbness. And naturally most people don’t think, ‘Oh, it’s my neck causing these symptoms.’”

The non-specific symptoms have made the average time to diagnosis from the onset of symptoms for a patient with myelopathy to be a little more than two years. Dr. Arredondo hopes that the correct diagnosis of this treatable disease can be made sooner for those in this community who suffer from it.

“Though this condition doesn’t always improve with surgery, it is the best treatment option,” Arredondo says.  “And it could greatly improve a person’s quality of life.”