Endometrial and other uterine cancers 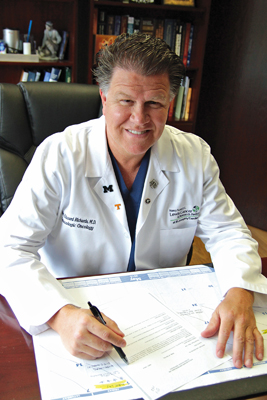 “Endometrial cancer is a type of uterine cancer that comes from the inside lining of the uterus,” explains gynecologic oncologist Wm. Edward Richards, MD. “There are other cancers that can come from the uterus as well. Leiomyosarcomas begin in the thick, muscular wall below the lining of the uterus.  Another type, carcinosarcoma, essentially develops in both the lining and the muscle.”

Endometrial cancer: the most common type of uterine cancer

Adding to the complexity of endometrial cancer is the fact that it is also divided into two types, with different characteristics and risk factors:

Type 1 endometrial cancer
This type is caused by excess estrogen.  It is seen mostly in women who are peri-menopausal and are struggling with obesity (fat tissue may increase a woman’s estrogen levels) or irregular cycles.

Type 2 endometrial cancer
This type usually occurs in older, post-menopausal women and has little to do with estrogen levels. Age is a factor as the risk of this cancer increases as a woman gets older, and it is often seen in higher rates in African-American women. The mortality rate for type 2 endometrial cancers is higher when compared to type 1 disease.

Dr. Richards notes that a genetic predisposition can also sometimes be a risk factor for either type of endometrial cancer.

Though there are different types of uterine cancers, the treatment is essentially the same. In most cases, patients will need a special type of staging procedure that is performed by a gynecologic oncologist such as Dr. Richards. During this procedure, the uterus, fallopian tubes, and ovaries are removed.  In addition, Dr. Richards will also remove lymph nodes to accurately assign a stage to the cancer. In nearly every case, this procedure can be done using a minimally invasive approach with the da Vinci robotic surgical system. 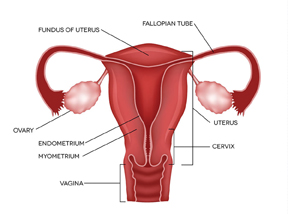 “After the surgery, we look at the final pathology report to determine if additional treatment is needed by assigning risk factors for recurrence, and we develop a treatment plan,” Richards says. “Once we know the stage and grade of the tumor, we can determine if the patient only needs to come in for follow-ups or if they need further cancer treatment such as radiation, chemotherapy, or a combination of both.”

The one encouraging fact in the fight against endometrial cancer is that the disease often presents signs and symptoms that may help with early detection.

“Bleeding irregularity, or bleeding when you shouldn’t be bleeding at all, is the biggest precursor to being diagnosed,” Richards says.  “An abnormal discharge may also be a sign.”

Dr. Richards hopes that all women understand the importance of reporting any abnormal bleeding to their doctor.

“Any kind of bleeding that you have in the post-menopausal age range is abnormal and needs to be seen by a physician,” Richards says.  “Even if it’s just a little spotting, if it is after menopause your doctor needs to know about it.”

For pre-menopausal women, a change in their period or bleeding between periods can be a sign of endometrial cancer. Though those symptoms can also occur with other, non-cancerous conditions, the smart choice is to see your physician as soon as you can.

“Endometrial cancer tends to forewarn you that there is a problem,” Richards says. “That’s why it’s so important for women to discuss changes or irregularity in bleeding patterns with their doctor. If it is cancer, we want to diagnose and treat it at the earliest stage possible.”