Was It Something I Ate?

After lunch, you wanted a nap. But you got nausea, stomach cramps, and diarrhea instead. You had just tried a new restaurant—was their food to blame?
If your symptoms are severe enough, that may be a question to ask your doctor.

“It can be difficult to distinguish between the two illnesses, but we check early on for other constitutional signs such as headache and body aches, which tend to indicate more a stomach bug or flu,” says Lawrence Zottoli, MD, of St. Joseph’s/Candler’s Primary Care located on Eisenhower. 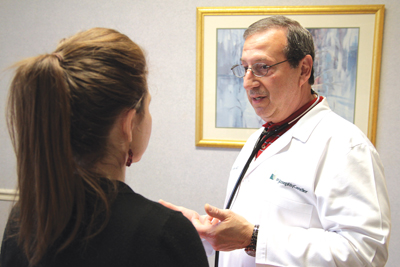 Gastroenteritis, often referred to as the stomach flu or stomach bug, may be caused by one of several different viruses. These viruses are contagious and people most commonly get gastroenteritis from contact with someone who is already sick.

Most food poisoning is the result of bacteria that has contaminated food, often because the food hasn’t been fully cooked or sufficiently stored or refrigerated.

“True food poisoning can be caused by toxins that certain bacteria release into our bodies,” Zottoli explains. “One example is Staphylococcal food poisoning, which can occur fairly immediately after ingesting food, such as mayonnaise, that’s been tainted. The Campylobacter species of bacteria is the infamous result of uncooked chicken being prepared in the same area as produce, causing cross-contamination.”

Dr. Zottoli says the best way for patients and their families to gauge their illness is to note how severe the symptoms are and how long they persist.

“Mild to moderate, short-lived symptoms in an otherwise healthy youngster or adult may be monitored at home at first,” Zottoli says. “Infants, the chronically ill, and the elderly are much more at risk due to the susceptibility of these patients to earlier dehydration.”

Patients with severe symptoms will need a physical examination, and sometimes blood or stool testing, to determine whether they are suffering from food poisoning or gastroenteritis.

“We always ask the patient or family about any exposure to recently-ingested meals, or food eaten at a restaurant or from a source other than the home,” Zottoli says. “Certain food poisoning may require treatment with antibiotics, although it is not necessary in many cases.”

Dr. Zottoli says the key to treatment of both stomach flu and food poisoning is rehydration.

“Rehydration, as soon as possible,” he says emphatically, noting the damaging effect that dehydration can have on the body, even resulting in death in severe cases.

“If a person cannot keep down clear liquid sips after several hours, it's time to seek medical attention,” Zottoli says. “Small sips of water or electrolyte-containing drinks can help replace fluids in the body, and they can potentially be life-saving.”

Learn more about food poisoning risks and prevention by taking our quiz.