The Principal’s Principles Of Happiness

Summer is considered a fun, lazy break for most young people, but for those entering or graduating high school, it really is a time of enormous change and anticipation. A new way of life awaits those starting their high school or college careers, and parents and teachers can only hope that they have provided the guidance and wisdom that will set their children down a path to health and happiness.

One woman who has helped guide young women for generations is Sister Mary Jude Walsh, R.S.M., a beloved Sister of Mercy who also served as Principal for Savannah’s St. Vincent’s Academy for 27 years.

Her advice to the girls about to start at St. Vincent’s this fall?

“Make the most of what your school has to offer,” Sister Jude says. 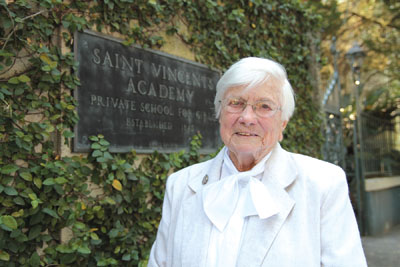 Having been born and raised in Savannah, Sister Jude was a student at St. Vincent’s Academy herself and actually needed no encouragement to make the most of it.

“I didn’t want my four years there to come to an end,” she recalls. “Especially because in the back of my mind I was thinking, ‘I want to be a Sister of Mercy.’”

Also in the back of her mind was an inkling of her desire to teach.

“Throughout my studies, I gravitated toward teaching,” Sister Jude says. After her entrance into the Religious Sisters of Mercy in 1943, she earned her undergraduate degree at Mount Saint Agnes College and her Master’s in Education at Loyola College in Baltimore. She went on to teach at seven different schools, and became Principal at four—Nativity School, Blessed Sacrament School, Cathedral Day School and finally at St. Vincent’s Academy.

Sister Jude still serves on St. Vincent’s school board, nearly a quarter-century after her retirement.

“Way before I got there, even as a student, St. Vincent’s had this marvelous tradition, dating back to 1845,” she says. “From the very first day, I just loved that place and have since dedicated my life to it.”

At 93 years old, Sister Jude says that God blessed her with good health.

“I’ve also received great care at St. Joseph’s, ever since I was born there,” she says with a laugh. “And Candler, too.” 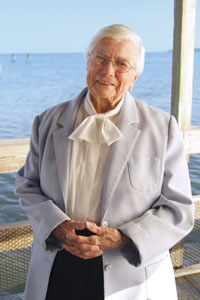 Being outside, especially on the water, is where Sister Jude felt happiest while also staying active. She loves to go crabbing, a hobby that started with a generous gift from a student’s dad back in 1958.

“A gentlemen, who had daughters at St. Vincent’s, was a carpenter and he built a boat and gave it to us,” she recalls. “That’s when we started crabbing. We toured all the waters of Tybee, Wilmington Island, all around the area.”

Though exercise is important to Sister Jude, she admits that she doesn’t do it as often as she should.

“I’m going to try to do better this summer,” she says. “Get the boat, and myself, out there.”

Unsurprisingly, as an educator Sister Jude also notes that mental fitness is also important for longevity and wellbeing.

“I read a lot and I stay involved in politics,” she says. “It’s very important, and I get concerned for others who aren’t at the same mental level that they once were.”

An additional component of a happy, long life for Sister Jude is service.

“At St. Vincent’s and in life, we are trying to provide an environment that is peaceful,” she says. “And you get peace and satisfaction when you are making some type of contribution to humanity.”

Sister Jude says she doesn’t necessarily envy today’s children, who have grown up steeped in electronics and screen time.

“The only thing I’m good at is a telephone,” she laughs. But she is confident that Savannah’s next generation can succeed in this new world, as long the essence of each person isn’t lost to the new age.

“The person is important,” she says. “We have to make more effort to focus on our humanity, and the morals that come from it.”

So, what is her advice for the young women who have just graduated St. Vincent’s, and are now beginning their adult life?

“St. Vincent’s Academy is such a rare gift to the young women of our community,” Sister Jude says. “Our alumnae list is filled with marvelous and successful women of nearly every career profession. My advice to graduates is to put into play the best of what you saw and learned there, and live happily.”