With all her brothers having moved on, and her father’s eyesight weakening, it was up to a young Faye Sanders to plow the fields of her family’s farm. 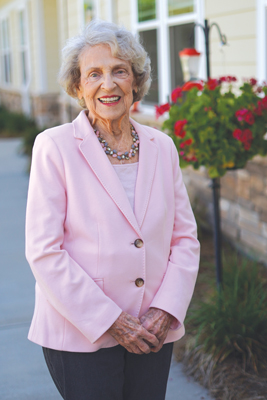 Years later, she would plow through the male-dominated field of Georgia law on her way to becoming the first female appointed to the Georgia Superior Court bench.

Judge Martin was born in 1934 outside Brooklet in Bulloch County, the youngest of 11 children. Her father, who was also a Primitive Baptist minister, grew mostly tobacco but also cotton, corn, and other crops. Though life on the farm could be tough, Martin never missed a day of school for 12 years.

“I was just a country girl, but I was very intent on education,” she says. “Luckily, I was healthy too.”

After graduation, Martin landed a secretary job for Cohen Anderson, a lawyer in Statesboro.  She was able to work there part time, providing her the money and time to attend Georgia Teachers College (now Georgia Southern University).  Both her work and continuing education stoked a strong interest in the law.

“My boss said, ‘Okay, you can go to law school, come back and be a lawyer with me,’” Martin recalls. This began her only time living in a big city, while she worked and went to law school at night in Atlanta. Two years later, she took the bar exam.

“I passed the sucker,” she says with a smile. 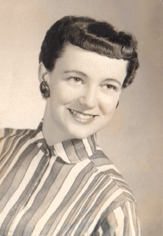 Upon her swearing in, Martin became the first female attorney in Bulloch County. She would practice as an attorney for the next 22 years. During that time, she married Hollis Martin and had two daughters, Janna and Jenny Lynn. However, as wonderful as her marriage and home life were, it did not slow Martin down.

“Mama wasn’t interested in maternity leave,” Janna Martin says. “She went back to work about two weeks after she had me.”

Judge Martin says that being the first female attorney did not make her feel like she had to prove herself to her male peers.

“We were just one big family, and I never felt that I was different,” she says. “Everyone knew my ability and my work ethic.”

In 1978, a new Superior Court judgeship was created for the Ogeechee Judicial Circuit, and included Bulloch, Effingham, Jenkins and Screven counties. The new judge was to be appointed by Governor George Busbee and would then have to run for the position every four years.

An old friend and classmate, B. Avant Edenfield—who was himself a strong candidate for the Federal bench at the time—encouraged Martin to put her name in for the appointment.

“I said, ‘There’s never been a woman appointed to a judgeship in Georgia before,’” Martin recalls. “And he said, ‘Come on now, you’re smarter than I am. Put your name in there.’”

Governor Busbee did indeed give Martin the appointment, making her the first female in Georgia to mark this achievement. She won re-election to the judgeship for many years after, until taking senior status in 2000. Having served the longest among the judges on the Superior Court bench, she was eventually named chief superior court judge. Once again, she was the first woman in Georgia to do so.

There was one other first for Martin, and it speaks to her impact she had on younger women who also loved the law. Martin became the first mother to swear in her own daughter as an attorney in Georgia. 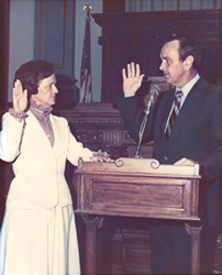 “Seeing the path my mom had taken was an inspiration,” Janna Martin says. “Not just for me but many women who became attorneys.”

Martin’s trailblazing career was chronicled in a book published by Mercer University Press, Judge Faye Sanders Martin: Head Full Of Sense, Heart Full Of Gold. It tells of the ups and downs that Martin experience from her childhood on the farm to her ascension to the bench.  Throughout her career, Martin never lost her passion for the law. She encouraged, and continues to encourage, anyone who was interested in joining the field.

Faye Sanders Martin and her siblings would often get cuts, scratches, stings and even stray nails in their feet while working or playing on the farm. Depending on the severity, Martin’s mother would apply a home remedy or make a trip to the family doctor. Even though rural medicine wasn’t easily accessible decades ago, Martin’s mother understood that it too was a necessity.

“Mama was wise about health and knew when something needed to be taken care of,” Martin recalls. “She taught me about what I could treat myself and when I needed to see the country doctor. Of course, now we have wonderful healthcare, even in the country. And they still see children for the same things—scratches, cuts and bee stings.”

At 85, Martin also stays as active as possible, joining several of the healthy activities in her assisted living home. These include a walking group, a chair exercise class, stretching and weight training. She doesn’t drink or smoke. She also pays attention to her diet, which includes a lot of vegetables, just like she used to eat on the farm.

“My parents gave me good genes, but their great care is what stuck with me,” Martin says. “I know the importance of taking care of your body, and I don’t quit.”