If you are ready to talk about your gastrointestinal issues, physicians have options ready for you 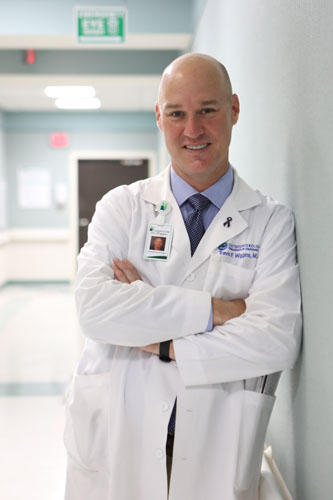 Confidentiality is a crucial part of healthcare, but for some conditions it’s also an emotional relief. Take for example patients who are experiencing gas, bloating, constipation or diarrhea. They often have a difficult time even sharing such things with their doctor.

If they can get past that moment of awkwardness, however, a variety of treatment options await them on the other side.

“I guarantee that whatever gastrointestinal, or GI, symptoms an individual has, they are not alone,” says Travis F. Wiggins, MD, of Gastroenterology Consultants. “When patients first come in, they are often embarrassed by their symptoms. But that simple conversation becomes reassuring when patients hear that their symptoms are shared by many other people.”

Some of the most common GI issues include:

“Gas, bloating and constipation make up a large percentage of symptoms in people that walk through my front door,” Dr. Wiggins says. “From a social standpoint, some of most difficult symptoms I hear about are uncontrollable belching, at a restaurant for example, or flatulence.”

What You Can Do

Some cases are severe enough that they require medication or even surgery. But Dr. Wiggins says that any treatment regimen—even those including surgery or medication—begins with lifestyle changes, many of which can be minimal.

“Change of behavior is the bedrock,” he says. “For gas and bloating symptoms, I usually recommend avoidance of certain dietary components off the cuff: high-fat diet items such fried foods and dairy products, as well as artificial sweeteners, especially sugarless gum and carbonated beverages.”

Conditions such as IBS or Crohn’s disease can also result in sensitivities to foods that are higher in fat, and also to cruciferous vegetables such as broccoli and cauliflower. Dr. Wiggins says that if people are in a social situation where they feel obligated to eat certain foods, they can often do so with a very small portion and tolerate the subtle effects.

“However, for some people the effect can be severe and requires complete avoidance,” he says. “Also, not uncommonly, individuals with IBS are afflicted with urgency to get to a bathroom not long after eating.”

For GERD, Dr. Wiggins says that changes in diet, exercise habits and weight loss can go a long way to relieving symptoms.

“In fact, if an individual has a BMI greater than 35, studies have suggested they would get more benefit from weight loss than any antireflux surgery,” he says.

The Double Benefit Of Speaking Up

Even small steps can’t be made until you and your physician discuss the problem. While the symptoms are more common than you think, every patient is different. An honest conversation with your doctor is the smart way to manage, or in some cases eliminate, those socially awkward symptoms.

“Seeking treatment is often a double-benefit scenario in that the individual feels a sense of relief learning that there is a commonality of these symptoms in the community,” Dr. Wiggins says, “and also in that we are able to come up with a treatment plan specific for that individual patient.”

You can be assured that Dr. Wiggins and his colleagues have heard it all and that their focus is on your health.

“As a patient’s life starts to change, it’s rewarding for them,” Dr. Wiggins says. “But it’s actually quite rewarding for me as well, as a physician who just wants to see people get better.”