The first time Atsushi Yamada tried surfing, he felt thankful to be alive. An older friend had provided the ride to the beach, the surfboards, everything. He took Atsushi and some other friends there during typhoon season in Japan and said, “Don’t come back in ‘til you catch a wave.”

“The waves were bigger than the Tybee Pier!” he recalls. “We sort of belly-boarded in and somehow survived.” 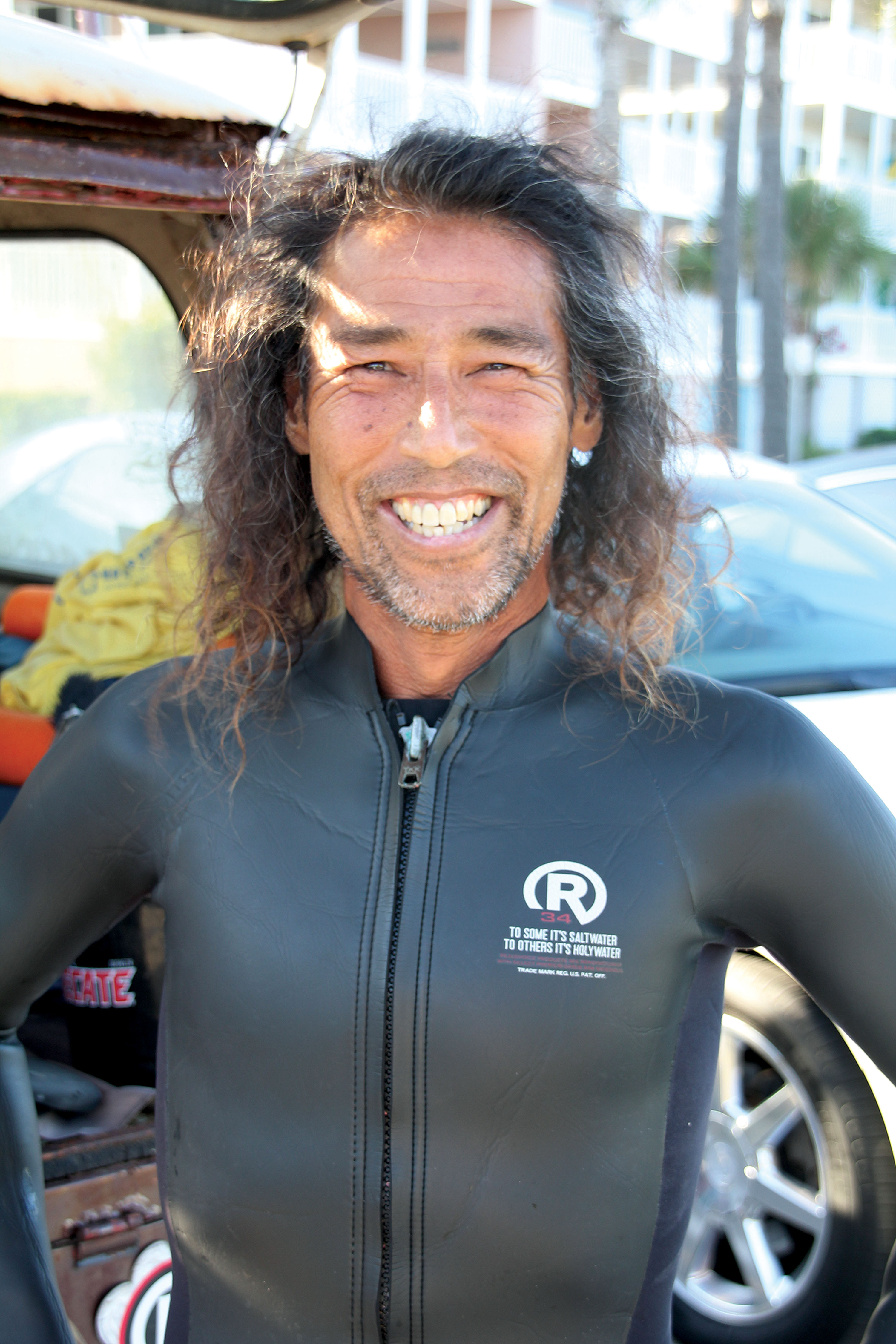 As a lifelong athlete who also loves snow skiing, Atsushi still felt a draw to surfing. The more he did it, the more he understood why—he loved the movement of the water, the smell of the ocean, the feeling of freedom. Now he shares that love with locals on the much smaller, much safer waves of Tybee Island through his Happy Surf Camp Aloha.

Here, he is known as Hot Sushi. And he loves surfing so much that not even a shark bite has slowed him down.

Sushi was born in Tokyo. His father was a skier who, after a career-ending injury, instilled those dreams into Sushi and his brother. Sushi became a pro skier and was part of his district’s alpine racing team. He was also an accomplished soccer player, and for a time lived in Guam playing for their men’s national team. But he never lost his love for surfing and the feeling of freedom it gave him.

So how did he end up in Savannah?

“In-laws,” he says with a smile. “I never thought I’d be sharing my passion of surfing on a little island in the southern part of Georgia.”

The Happy Surf Camp Aloha brings a taste of the world of surfing to Tybee each summer. Some of the young campers take to the sport more readily than others, but Sushi keeps the focus on the feeling that surfing can give you.

“I want them to learn surfing little by little each day, but most importantly to have fun,” he says. “If a child is nervous or unhappy, I see their mood change as soon as they get out there. And the kids will start helping the ones who need help; I don’t have to ask them to do it.”

Sushi also participates in the Surfers Healing program on Folly Beach in South Carolina. The program offers a chance for children with autism or other special needs to try surfing for free. The joy and confidence they feel after successfully riding a surfboard still humbles Sushi every year. He says that just thinking about what those kids achieved gives him “chicken skin” (more commonly known in this area as goosebumps) every time. 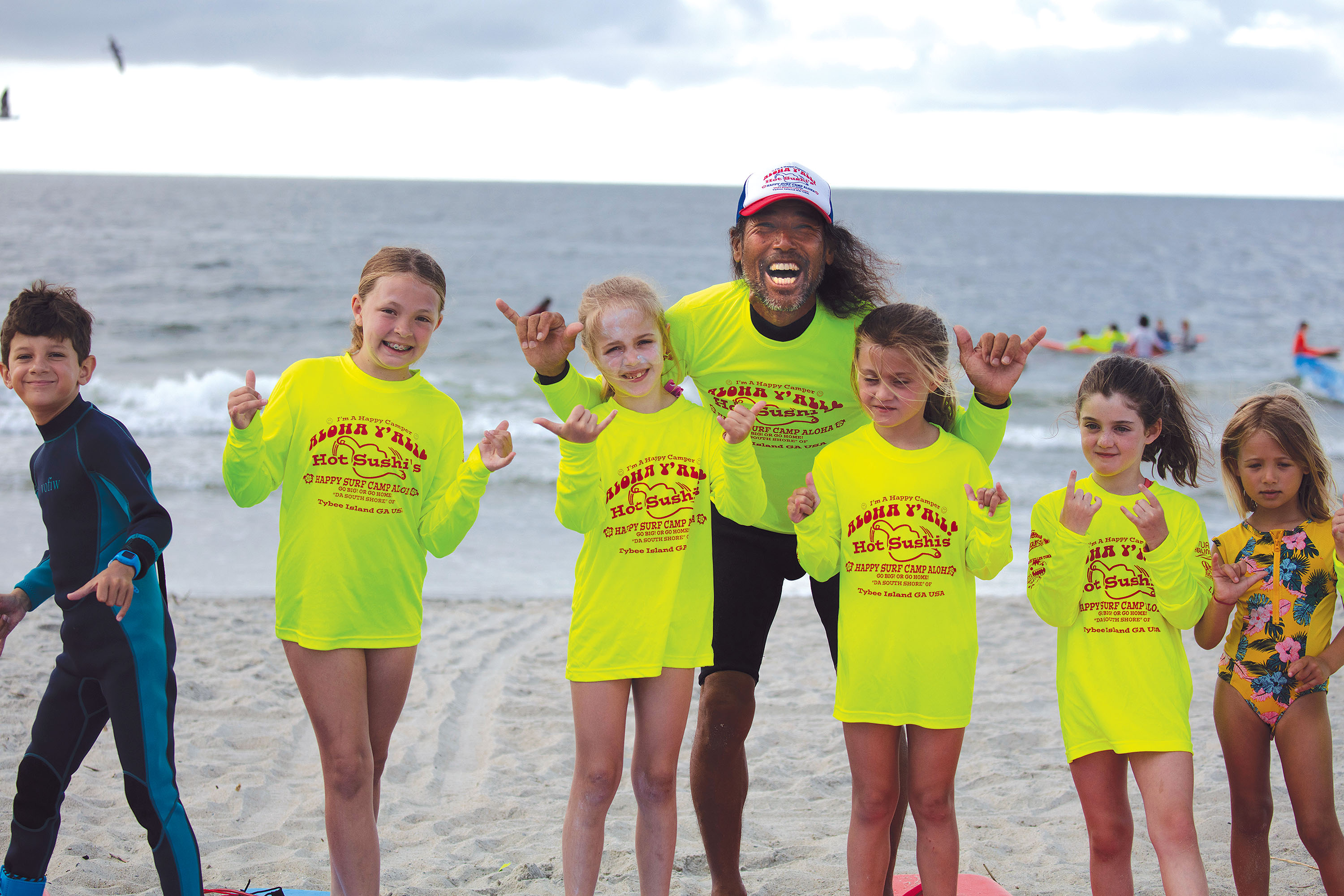 Sushi also makes sure the kids understand water safety, how to protect themselves from rip currents and to keep the dangerous rays of the sun blocked from their skin.

“I help the little ones reapply sunscreen and remind the older ones to do it too,” he says. “I also recommend the shirts that have UV protection. Even though it’s hot, the long-sleeved kind can give you more protection from the sun and they also protect you from scratches from the sand.”

One thing Sushi has never had to worry about is sharks—until last year. He went out a good distance to help an older camper catch a wave. As he watched her reach the shore safely, he felt a new but unmistakable pain in his leg.

“I knew right away what had happened,” he recalls. “I didn’t want to look at it. It was a real OMG moment—all I could think was no more surfing, no more skiing, no more soccer!”

Sushi says he is deeply grateful to the Tybee Island Fire and the local EMS for their quick response. He was also thankful that when he finally did look, his leg was still there, too. Just two days later, he was back in the water. To his surprise, all of his campers were too.

“I’m not a marine biologist, but I’ve been surfing and scuba diving for many years in many different waters,” he says. “I’ve seen sharks in Guam that were bigger than my Volkswagen bus. This Tybee shark wasn’t chasing after me. I think the bite was pretty much an accident.”

With dramatic shows like Shark Week often portraying nasty shark attacks, Sushi often has to remind people that sharks around Tybee Island are exactly where they are supposed to be—their ocean home. 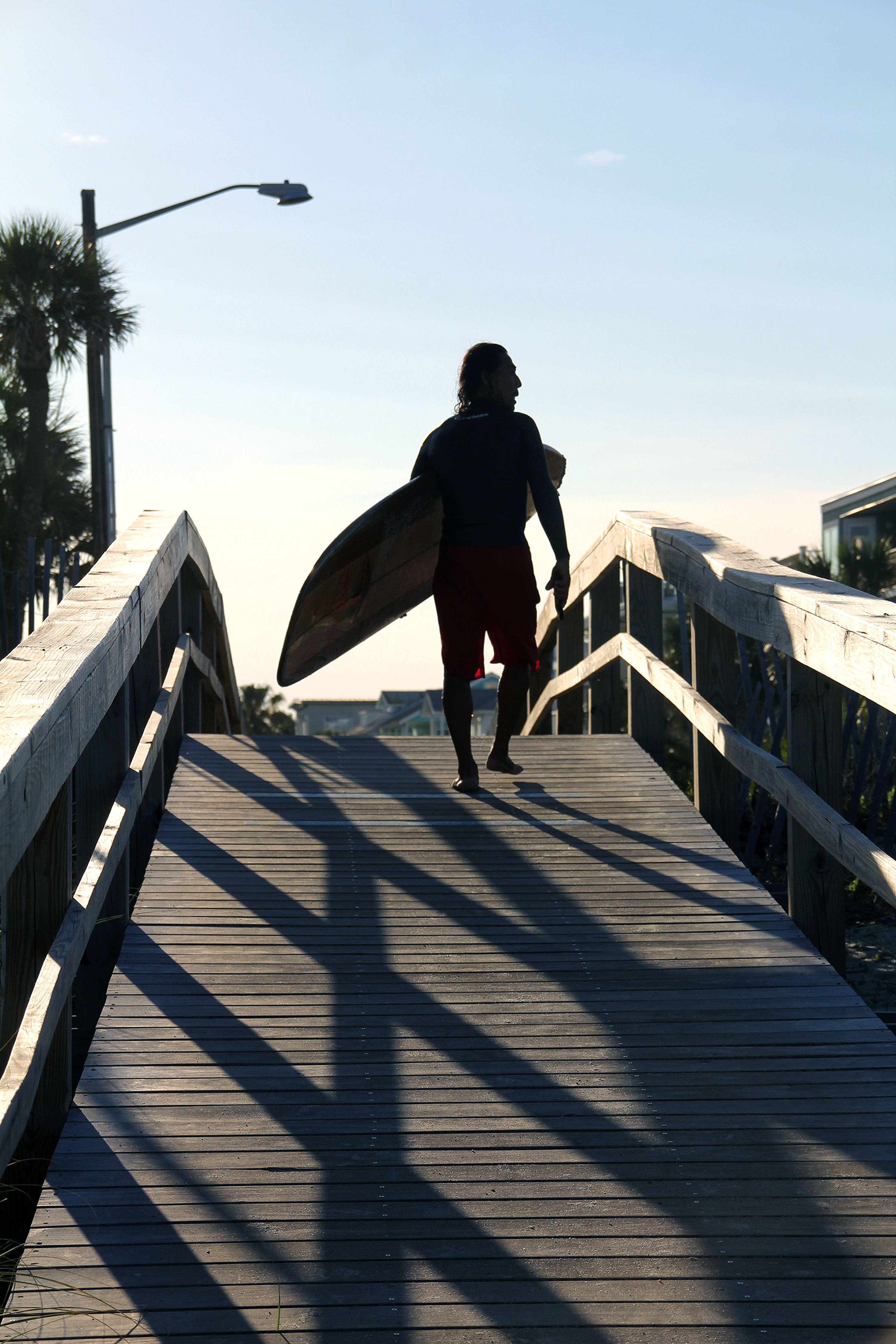 “We are the intruders,” he says. “Even after getting bit, I still have a lot of love and respect for these creatures.”

Love, respect, appreciation—for Sushi, all of these ideas are contained within the word Aloha. Though the Hawaiian word is well-known as a greeting, for Sushi it means much more.

“Hawaiian culture and surfing is interconnected, and the Japanese and Hawaiian cultures are very similar as well,” he says. “Aloha, to me, means many, many things. I want to practice Aloha in the correct way, not because it sounds cool.”

In Japan, Sushi was raised in the Shinto tradition, which stresses respect of ancestors and the natural world. He found those same principles in Hawaiian surfing culture, in which the ocean is respected on a spiritual level.

“Our precious Mother Nature is always equal to everyone, whoever we are,” he says. “No matter what, we must harmonize with Mother Nature.”

Sushi reminds his students that good waves, good snow or other gifts of nature can’t be bought, but must be earned through patience, respect and appreciation.

“Aloha is also an expression of love and compassion,’” he says. “And I have seen that the feeling of Aloha can spread among these kids as well at the surf camp. It’s contagious in a good way!”

Learn more about Hot Sushi and his camps on his website here.