When digital mammography replaced film in St. Joseph’s/Candler’s Telfair Pavilion, radiologists were able to view images instantly and anxious patients were able to receive results more quickly. Physicians could also magnify the images and adjust their contrast, optimizing diagnostic information. This was especially helpful for those patients with dense breasts.

Mammography for these women has now undergone a new revolution, and its name is tomosynthesis. 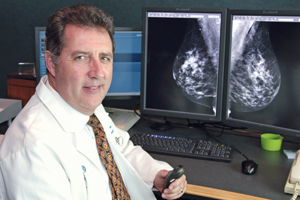 Lora Reese, Manager of the Telfair Pavilion, believes the advanced technology will benefit both patients and physicians.

Tomosynthesis eases that difficulty by creating fifteen x-ray images of the breast that are reconstructed by computer into a 3D image. A radiologist can then examine the breast tissue in layers, one slice at a time, rather than using one flat image.

“The screening is performed in the same setting as a standard mammogram,” Gouse explains. “In fact, 2D and 3D are done simultaneously, and the woman is positioned in exactly the same way. But with tomosynthesis, the machine also makes a short arch over the breast to obtain the projection images.”

By being able to view the breast in increments, radiologists can more easily distinguish true abnormalities from those in which overlapping tissue is obscuring, or in some cases mimicking, a lesion.

“Having improved ability to sort out whether or not we have found an abnormality leads to fewer patient recalls,” Gouse says. “We don’t have to call patients back as frequently for additional imaging, because we can answer that question at the time of their initial exam.”

Fewer recalls means less anxiety and inconvenience for the patient, which Dr. Gouse sees as an added benefit to the improved detection provided by 3D mammography.

“Mammography has always been the cornerstone of early detection,” Gouse says. “3D mammography is the next step. If we can find more cancers earlier, when they are smaller, they are more easily treated and more curable.”