Keeping A Good Head On Their Shoulders

Female athletes are at risk for concussions in several sports

Awareness of the long-term damage caused to the brain by concussions has shaken up the world of football over the last few years, but the danger isn’t exclusive to that sport or to the male athletes who have received the most news coverage. Female athletes at all levels also need to be aware of the risk of concussion. They should also be ready to accept how concussions are treated, even if that means staying out of the game.

“Concussion is an injury to the brain from mechanical force or trauma to the head that results in temporary loss of normal brain function,” says neurologist Jill Trumble, MD. “Basketball and soccer are among the female sports that have the highest risk. But over the past several years another sport that we have been seeing associated with concussions is competitive cheerleading.”

Depending on their severity, the resulting symptoms can be debilitating for athletes, especially as they try to complete schoolwork.

“Symptoms of concussion include confusion, problems with balance, difficulty concentrating, headaches, dizziness, nausea or vomiting, changes in vision or speech, ringing in ears, and sensitivity to light or sound,” Trumble says. “Not all of these need to be present to diagnose concussion.”

The certified athletic trainers of St. Joseph's/Candler’s Sports Medicine who work in Savannah’s local high schools and colleges are ardently aware of concussion risk at both levels. Ken Tessier, Head Athletic Trainer at Armstrong Atlantic State University, and his assistant Caroline Brif, know that concussions will happen in women’s basketball and soccer.

“Any time we see a player with contact to the head, we are checking for signs and symptoms of a concussion,” Tessier says. “If a player reports or demonstrates two or more symptoms, we do a full evaluation that includes cognitive and balance components.  We use the Sport Concussion Assessment Tool 2, or SCAT2 test, for evaluation.  We also utilize the ImPACT testing program to assist with concussion assessment and return-to-play decisions.” 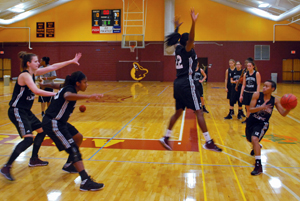 The SCAT2 test and the ImPACT test are administered by athletic trainers or other healthcare professionals to assess the potential damage from concussion to a player. Together they help measure the athlete’s symptoms, visual and verbal memory, reaction times, and more.


If a player is found to have a concussion, she will not return to the game that day.

“The American Academy of Neurology’s most recent guidelines state that if anyone has signs of concussion they need to stay out of play for that day and not return until evaluated by licensed healthcare professional trained in concussions,” Trumble says.

“We wait for a player’s symptoms to resolve and for their ImPACT baseline to return to normal, then put her through a progressive return to play protocol that takes about four days to complete,” says Tessier. “Every concussion is different.  Some take a few days for the symptoms to go away, some take a month or more.  So it really depends on the athlete how fast they can return to play.”

“We can tailor our treatment to each athlete,” adds Brif. “For example, we may consider temporarily removing an athlete from class if they are having a lot of difficulty initially.  Our treatment is often a team approach between the athletic trainer and physician.” 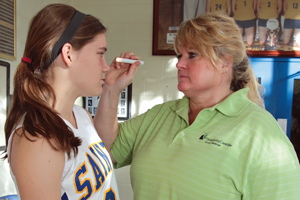 “Last year I saw three concussions, two of which were significant,” Barton says. “One missed almost of month of school because her headaches were so bad.”

Putting their life and their sport on hold for such a long time may seem like too much for some athletes. However, rejoining the game too soon or under-reporting symptoms causes a greater risk for additional concussions.

“Based on studies, athletes up to high school with a concussion should be managed more conservatively as this age group takes longer to recover,” Trumble says.

Tessier and Brif take time to ensure that their athletes at Armstrong are educated about the importance of reporting symptoms, and Barton will sometimes have to insist that an athlete at St. Vincent’s gives herself more time to heal.

“I think most of our female athletes here understand that they need to report symptoms of a concussion, but there will always be those who think they can handle it on their own or play through it,” Brif says.

Dedication to their team and enthusiasm to get back out there is, of course, a part of every athlete’s nature, whether male or female. Awareness of the risk is the first step in making sure all athletes seek proper treatment, even if they’re not tackling each other on the football field.

“Concussions have been a hot topic in football lately,” Tessier says. “But it's important to remember that concussions can occur in any sport or recreation activity.”