The Papanicolaou, or Pap, test is a screening tool for cervical cancer and other pre-malignant conditions. The standards for when a woman should receive a Pap test have recently changed and continue to evolve, but for Wm. Edward Richards, MD, the most important recommendation for a patient to follow is the one from her own physician.

“With the new standards, there will be some segment of the population that will not be required to be tested every year,” says Richards, who is board-certified in Obstetrics and Gynecology as well as Gynecologic Oncology. “But it’s still important to be consistent with your doctor’s recommendation on screening.” 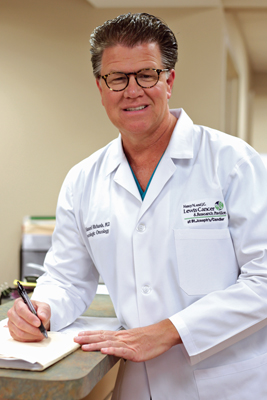 Dr. Richards notes that many patients equate a Pap test with a pelvic exam. Because a Pap test is often done during a pelvic exam, the two procedures fall into a gray area that truly should be in clear-cut black and white.

Women who experience irregular vaginal bleeding should also see their physician immediately, even those who have been receiving routine Pap tests. Abnormal bleeding can be a symptom of several conditions, including cervical cancer.

“Premalignant conditions that are picked up from a Pap test can be treated with a local therapy,” Richards says. “But for invasive cervical cancer, the treatment is drastically different and patients need to see a gynecologic oncologist.”

For most patients who do have cervical cancer, Dr. Richards is able to perform surgery with the da Vinci Robotic Surgical System.

“In the past, surgery for cervical cancer required a large incision,” Richards says. “Now, with the da Vinci robot, this procedure can be minimally-invasive, allowing the patient to recover more quickly and return to her normal daily activities sooner.”