Though colds are more prevalent during the winter months, the real culprits are germs

“Put your jacket on before you go outside or you’ll catch a cold!”

How many times during your childhood did you hear your mom say this? And if you’re a parent now, how many times have you caught yourself saying the same thing to your own children?

Parents will gladly take any extra steps necessary to protect their children from colds, but a daily fight over whether or not your child needs a jacket to go outside on a chilly day may not make any difference.

“There’s no evidence that cold or rainy weather increases the likelihood of getting sick,” explains L. Nelson Elam, MD, a pediatrician at SouthCoast Health.  “Kids get sick from germs. “

Interaction among children who are spending more time indoors, or even just crowded together at bus stops, quickens the spread of the viruses that cause colds.

“There are more respiratory illnesses around that time,” says fellow pediatrician William E. Webb, MD. “The kids are all together, and some don’t wash their hands as well as we’d like them to, or don’t remember to cough and sneeze into their shoulder or elbow.”

The doctors have even noticed a slight dip in the number of visits from sick children during the last week of December and the first week of January, even though it’s likely kids are spending a lot of time outside on their winter break.

“If children are not around as many other kids, it gives them a chance to get better if they are sick, without spreading the germs to someone else,” Elam says. 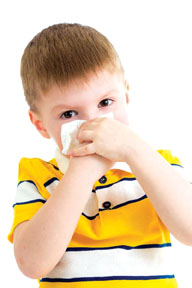 “But when school starts again in mid-January, the number of sick visits often picks back up,” Webb adds.

Catching a cold is a different risk from hypothermia, in which a person is suffering from dangerously low body temperature.  Hypothermia is typically associated with freezing temperatures and weather conditions that are rare in this region.

Dr. Webb says that giving your child a choice—between a jacket or a long-sleeved shirt, for example—can help children feel more in control and less likely to fuss. Dr. Elam notes that a typical, mildly chilly winter afternoon could even be used as a teaching point.

“Let your child know that the common-sense thing to do when playing outside is to have a jacket or sweater on, but then let them make the choice,” Elam says. “Sometimes it’s good to let a child learn from experience.”

Learn even more about cold prevention by taking our quiz.