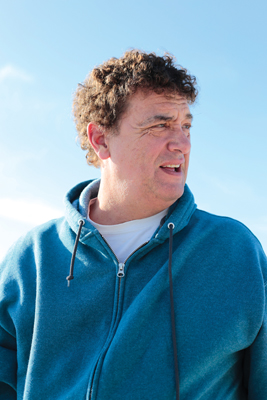 The Pennsylvania native was an experienced scuba diver, exploring ship wrecks in Lake Erie for years before moving to Savannah. He thought shark teeth would be tiny and relatively boring, until his co-worker brought a big one in to show him.

“I couldn’t believe the size and quality of it,” Eberlein recalls. “They’re actually kind of beautiful. So I said, ‘I want to find one. Just want one.’ I got started using a charter service out of Hilton Head, and I got hooked right away.”

Eberlein has found all kinds of prehistoric treasure—whale fossils, mammoth teeth, crocodilian teeth, and of course, the teeth of the legendary Megalodon shark. It’s the teeth that tell us how massive these prehistoric sharks were—scientists have calculated that many Megalodons were 60 feet long and weighed more than 50 tons.

He collected his favorites in boxes, and when those boxes were full, he would store them under his bed. Eventually he realized there was no room for any more boxes.

“I was actually more into finding them then I was into having them,” Eberlein says. “I thought maybe I could sell a few just to help with boat payments. That’s how it started.”

With a business license and a tax ID number, Eberlein’s obsession eventually became his full-time job. He has customers—many of them repeat customers—from every corner of the globe: New Zealand, Chile, South Korea, the United Kingdom, and every U.S. state. Despite the demand, Eberlein only sells fossils that he found personally.

“Diving for me is like being a kid on an Easter egg hunt,” he says. “Some days I find nothing, which makes the days that I do find something even better.” 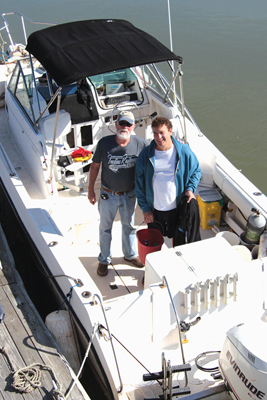 As much as Eberlein loves diving, he is careful to not make it sound easy. He often has to turn down requests by inexperienced divers to go out there with him.

“This isn’t normal diving,” he says. “You have strong currents that can drag you to the bottom. You have no visibility and cannot even read your air pressure gauge. There’s also sea life that you can’t see, and it can’t see you. I can be digging through the mud and feel something, and then it pops up and it’s a stingray.”

Eberlein was profiled in an article in The New Yorker that detailed just how dangerous this obsession can be. Even experienced divers have died in the search for Megalodon teeth. But Eberlein’s years of diving in the cold, dark waters of Lake Erie have taught him to plan well and not to panic when the unexpected—such as gripping a frightened stingray—occurs.

“I’m always careful,” he says. “And I never go diving without a boat captain.

The Lure Of The Megalodon

Whatever drives Eberlein to attempt such dangerous dives, it must be similar to what draws people to his collection. He says that kids often get especially excited about the Megalodon teeth.

“A lady once told me, ‘I bought my son a $400 video game system, but all he ever does is carry around that $50 shark tooth,’” Eberlein recalls. “I like that it gets kids into science. Most kids love either dinosaurs or sharks, and the Megalodon is pretty much the dinosaur of the sharks.” 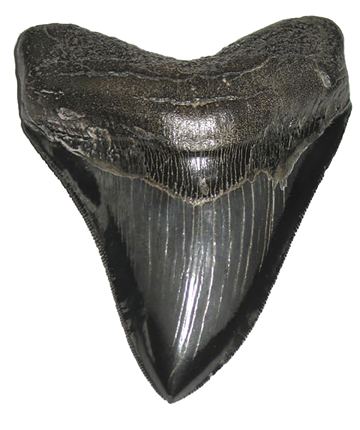 Just as his fans’ enthusiasm is unlikely to ebb, neither will Eberlein’s. He tries to dive every day.

“Even on the coldest day of the year, I still want to be out here,” he says. And collectors around the world love him for it.

“People are drawn to these things,” Eberlein says. “Whether it’s an adult collector or a child getting a broken tooth for their birthday, they just love these teeth. The effect they have on people is amazing.”

With the turmoil brought by Hurricanes Matthew and Irma within the space of just one year, residents of this area may feel that the ocean is not their friend. However, in the long-term, coastal living has shown to have some real health benefits. For diver Bill Eberlein, the most notable effect is stress management.

“I was never really a worrier, but living this lifestyle has definitely lowered my stress,” he says. “There is nothing more calming to me than being out in these waters.”

Bill’s wife Dodie agrees, noting that at her husband’s physicals, doctors will tell him he has “perfect blood pressure, perfect cholesterol, and a perfect heartbeat.” She adds, “This is the most laid back guy you’ll ever meet.”

There seems to be a restorative effect of spending time near the ocean, especially when tied with exercise and play. Madison Suber, Health Educator in St. Joseph’s/Candler’s Wellness Center, says that swimming in the surf or walking or jogging on the beach can have multiple benefits.

“Both swimming and walking briskly, if done regularly, can improve our heart health and reduce the risk of chronic disease,” Suber says. “But additionally, the sea water and air may also have a therapeutic effect, decreasing stress and increasing our sense of wellness.”

Specifically living on a Southern coast, with milder winter temperatures, also provides a boost because this invigorating playground is available to us almost all of the time.

“Even in the winter, our beaches are a wonderful place to run or walk,” Suber says. “We have this unique environment so close to our homes, so there’s no excuse. And who wouldn’t want to hear the waves crashing gently on the shore while they exercise? It’s energizing and calming at the same time.” 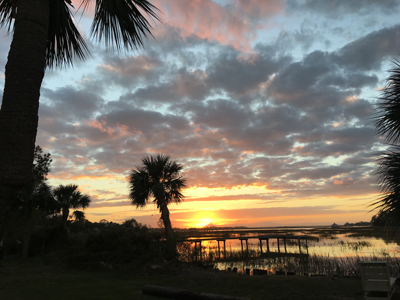