Return To Learn, Return To Play

Football season may be over, but concussion risk for high school athletes in any sport is year-round. There are still chances for player-to-player (or is some cases, player-to-ground) hits in basketball, soccer, softball, lacrosse, cheerleading, and wrestling. St. Joseph’s/Candler’s Sport Medicine program, which has been setting the standard for athletic health care in several of Southeast Georgia’s high schools and colleges for decades,  is continuously developing its policies to address the needs of the students it serves.  Since the risk is always there, the program added a second athletic trainer—specific to concussions—to always be there too. 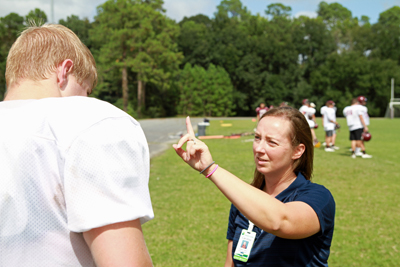 A Matter Of Time

A concussion is a brain injury caused by some kind of trauma or blow to the head. Any athlete—male or female—could possibly suffer from one in a game or during practice. While the moment of injury may be clear, what happens next can be different for every person. Symptoms such as headache, dizziness, confusion, or nausea may not even appear until the next day. One student may recover in a few days, another may take weeks. Brif checks in with these students routinely to make sure they are on the right track to recovery.

“Communication with our team physicians is great, and that’s part of what I do,” Brif says. “I talk with the athletic trainer, the patient and the parents, and the physician, making sure everyone is on the same page. We have a lot of athletes in our schools, and this makes sure that people are getting better and not falling through the cracks over time.” 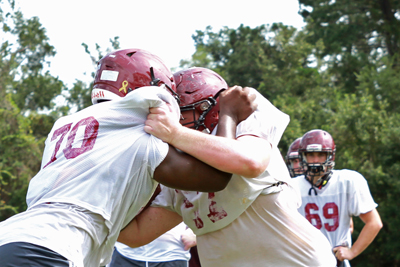 Part of getting a student back to where they were before their injury is establishing their pre-concussion baseline. During a player’s clinical exam, athletic trainers also use the Immediate Post-Concussion Assessment and Cognitive Testing, or ImPACT program, to measure cognitive functions such as verbal and visual memory and reaction times.

“If a student suffers a concussion, we’ll have them retake the test,” Brif says. “Then we have objective data to compare their normal brain function to where they fall after the injury.”

The team physician and athletic trainer develop a concussion management plan based on the patient’s individual needs. Brif can use the player’s ImPACT score, along with her own observations, to make sure the student is progressing safely and at the right pace.

“If I know a student is having a really hard time with verbal memory scores, it tells me they may have a really hard time in the classroom as well,” Brif says. “For a kid with a concussion, just being in school can be challenging.”

Students may be surprised to find that their athletic trainer’s primary goal is having the student back, and succeeding, in school. This is known as Return to Learn. Once that has been achieved, then they can work on Return to Play.

“We want to make sure step-by-step that these athletes are okay,” Brif says. “And we’ve seen that when our initial goal is to get kids back to being a normal student, then the Return to Play part becomes much easier. When I see that they are back to where they were academically, I know it’s okay for them to start stressing their body a little more. The athletic trainers then supervise the student through a stepwise progression of exercise over several days to make sure no symptoms return.”

Final medical clearance is given by a physician. If cognitive function or symptoms are unusually prolonged, the student may be referred to a neurologist, though Brif says this doesn’t happen often.

Brif tries to do a little teaching herself during the initial baseline exam with the athletes.

“The ImPACT test is a good time for some education,” Brif says. “I ask the students to please let us know if they notice anything off about how they feel, and I emphasize that playing through injuries is never a good idea. It could make things worse if you get a second hit before recovering from the first. And that it will only take you out of your sport even longer.”

Parents also appreciate the guidance and communication Brif provides. Though the concept of concussion risk is more familiar now than in the past, many parents still aren’t sure what to do or what not to do for their child.

“Sometimes a concussion is dramatic and sometimes it’s more subtle,” Brif says. “I try to help parents understand whether something is emergent or not, and also let them know that symptoms may not show up immediately, or they may evolve over the next day or two. But the most important thing I want them to know is that we are trained to evaluate, diagnose, and treat concussions, and we will be there every step of the way.”

Is It A Concussion?

Every person is different, but there are some common signs and symptoms that can occur after a person has suffered a blow, bump, or jolt to the head. Concussion symptoms include:

If you think it might be a concussion, don’t wait. Children should report it to their coach, teacher, or parent as soon as possible. You should be seen by a health care provider for evaluation.