One of the miracles of our body that we take for granted is that our hearts pump without us thinking about it. But a severe heart attack can take that power away when we need it the most.  Cardiogenic shock occurs when the heart cannot pump enough blood to meet a patient’s needs. If not treated immediately, cardiogenic shock can be fatal.

Physicians in The Heart Hospital at St. Joseph’s Hospital use the Impella, a left ventricular assist device that augments the heart’s cardiac output, on patients suffering from a severe myocardial infarction (commonly known as a heart attack). In short, the Impella does the pumping when the heart cannot. With the device performing the heart’s role, it gives interventional cardiologists like William F. Wallace, MD, the chance to focus on opening blocked arteries and saving the patient’s life. 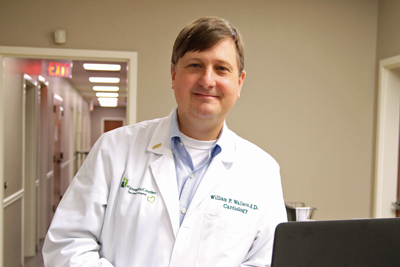 Now the Impella has been upgraded, and St. Joseph’s Hospital is the only one in the region that offers this advanced technology. This is great news for heart patients, but one fact remains the same—survivors have an important role to play in getting their heart strong again and preventing another heart attack in the future.

“The Impella is typically used as a small pump for the left ventricle of the heart,” Dr. Wallace explains. “But in very severe cases, the right side of the heart can also fail. So the blood is not being pushed out to the lungs and becoming oxygenated. Medications can help support pumping, but the pump is not being primed, so to speak.”

Dysfunction in the right ventricle is common in heart attack patients who have gone into cardiogenic shock. The new Impella RP has been specifically designed to provide support to the right ventricle. Dr. Wallace places a thin catheter through the patient’s leg, implanting the tiny pump so that it can take blood from a vessel outside the heart and push it through the heart and into the lungs.

“Within a few minutes or less, the blood pressure starts going up, and we can dial back the medications that we use to support the heart rate, blood pressure, and cardiac output in a shock setting,” Dr. Wallace says.

This capability has long-term implications for the patient, in that those medications—while life-saving in the emergency of a heart attack—can have an adverse effect on the heart’s pumping function.

“The Impella RP helps put the heart into more of a total rest state, which allows it to recover better,” Dr. Wallace says.

Get Out And Stay Out

The fullest, most optimal recovery is the goal for physicians and staff at The Heart Hospital.

“Once we get you out of the hospital, we want to keep you from ever having to come back again,” Dr. Wallace says.  He typically follows up with patients a week or two later, and he strongly encourages patients to implement better lifestyle choices—including new dietary and exercise routines—and to maintain compliance with their medications. He also refers patients to St. Joseph’s/Candler Cardiopulmonary Rehab, where they will receive that education and support, usually over a few months.

“During this critical window of time, we want to get your risk back down to where it was before the myocardial infarction, if not even lower,” Dr. Wallace says. “What you learn in cardiac rehab is very important to success in that regard, because if you do the right things, the odds of something happening again become exceedingly low.”

Dr. Wallace says that the staff at St. Joseph’s/Candler Cardiopulmonary Rehab does “great work.” So what exactly do they do?

In short, they help you regain control of your health. Through multiple sessions, patients begin with cardio exercises, and then add resistance training. Patients gain strength while losing weight and receive guidance and monitoring from rehab staff.

Mark Berry came to rehab after he had open-heart surgery to replace a mitral valve. At first he was so weak in recovery that he needed a cane to walk. But he was determined to see it through.

“Whatever it is that I need to do to get better, I am going to do it,” he says. Within the first week, Berry didn’t need the cane anymore. Over the following weeks, Berry was able to expand his 12-minute sessions into hour-long ones.

“I, 100 percent of the time, feel better the rest of the day because of this,” he says. 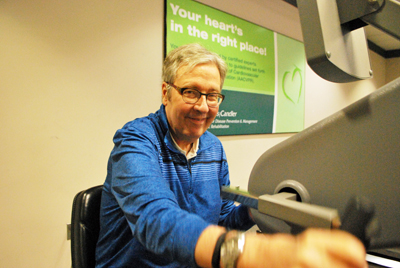 With supervised exercise therapy, patients not only receive monitoring of their heart’s rhythm for abnormal rates, they also get educated about healthy behaviors from a dedicated staff.

“Cardiac rehab doesn’t change your past, but it can help you improve your heart’s future,” says Cardiopulmonary Rehab Manager Emily Parks. “It is also how you can lower your risk of a second cardiac event. It’s the path to feeling better than before, and we’re by your side the whole way.”

Patients in cardiac rehab stand to benefit in several ways. You will:

Read more about Mark’s 12 weeks in rehab on our Living Smart blog.