Kyra Samuels is an emerging champion in a growing sport

When Kyra Samuels found a sport she loved, she was driven to do it every day. And it was a long drive.

Growing up in Statesboro, the teen traveled an hour to follow her passion: Brazilian jiu-jitsu. 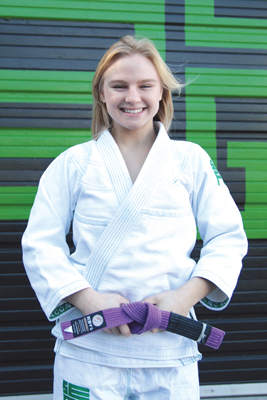 My mom would pick me up from school and drive me to Savannah so that I could train, and then drive me back to Statesboro,” Samuels recalls. Once she got her driver’s license, she did the same daily trek by herself.

“It becomes a lifestyle,” Samuels says. “I got really into it, and I found I had a self-confidence that I’d never had before.”

Samuel’s father was among a few practitioners of Brazilian jiu-jitsu in Statesboro, and when he tried to share it with his daughter and her siblings, he originally got no takers. But later on, Samuels opted to try it for a few months.

Brazilian jiu-jitsu is both a martial art and a sport, developed from the Japanese martial art of judo in the early 1900’s. It became a little more known in America when its master practitioners won several Ultimate Fighting Championships in the 1990’s. Instead of punches or kicks, Brazilian jiu-jitsu is based on ground fighting and grappling. Fighters win by forcing their opponent to submit, or tap out, after being overpowered with moves such as a joint lock or chokehold. With proper technique, a smaller or weaker person can still defeat a bigger opponent. When Samuels realized this, she quickly fell in love with the sport.

“Most of my training partners are men who are 40 to 50 pounds heavier than me,” she says. “But if you have good technique, those size and strength differences aren’t much of a factor anymore. You can outdo their strength with technique. It makes it so much fun.”

Samuels quit her high school cross country, track, and soccer teams to focus solely on Brazilian jiu-jitsu. She continued those daily trips to SERG Brazilian Jiu Jitsu and Fitness in Savannah. As her skill and experience increased, she entered competitions hosted by the International Brazilian Jiu-Jitsu Federation (IBJJF). The IBJJF tournaments are the biggest in the world, and Samuels has traveled to cities across the country to compete. 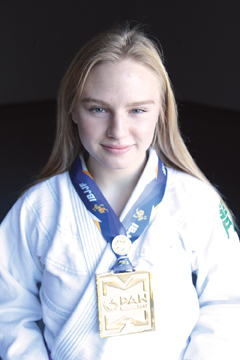 In 2017, as a blue belt (the second adult rank) in the female light featherweight division, Samuels took first place in the Pan-American Championship, the second most prestigious tournament in the IBJJF. She did the same in the Pan No-Gi Championship that year. A gi is the practitioner’s traditional uniform; in a No-Gi tournament, fighters typically wear shorts and a rash guard instead. Though the difference may seem small to spectators, the changes in rules and strategy are significant enough to warrant their own competition.

Samuels was then promoted to purple belt, the intermediate adult ranking. With even more formidable opponents, she was able to take third place at the Pan-American Championship and second place at the Pan No-Gi this year.

Samuels is matter-of-fact about her ultimate goal, mostly because she knows how much she’ll enjoy the journey to get there.

“I want to be a black belt world champion,” she says. “That may be far in the future, but in between then and now I want to do well at each competition. For me it’s about putting all of my training on the mats in the best way possible. Smaller goals help me to keep that drive. Even just saying, ‘Tonight I want to hit this one move,’ and then I hit it, that’s what keeps me going.”

Samuels understands that, although knowledge of the sport is growing, not many people in coastal Georgia are that familiar with Brazilian jiu-jitsu. But she would encourage anyone—male or female, young or old, big or small—to give it a try.

“I used to be scared of just walking down the street by myself,” she says. “There was an insecurity. Now I know that I would be able to defend myself. I think everyone can benefit from having that kind of understanding. It helps you to be confident in life and hold yourself higher. And Brazilian jiu-jitsu gave that to me more than anything else—more than punching or kicking or anything like that—and I think it can give that to others.”

Do We Need His And Her Workouts?

Kyra Samuels will admit to being “really small” in comparison to her Brazilian jiu-jitsu training partners. But she also says that “when we’re on the mats, I feel like we are all the same.” 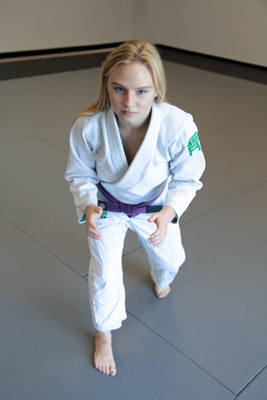 Still, it is a common misconception that females need to train differently from men to get the most out of their workout. Kristen Maynard, an exercise physiologist in St. Joseph’s/Candler’s Wellness Center, often gets this question from her clients. The short answer is no.

“Men and women do not need to train differently,” Maynard says. “Daily energy requirements are based on fat mass, fat-free mass, and activity level. Now, men do tend to be leaner, due to needing less essential fat for metabolic functioning, and they tend to have larger hearts, leading to more blood being able to move through the body per beat. Lastly, men tend to have higher hematocrit levels due to the higher testosterone levels—this means easier oxygen carrying capacity to working tissue. But basically, what are seen as sex differences are really just differences in body composition and size.”

Maynard emphasizes the essential principals that work for one and all.

“Train the heart and lungs with cardio, muscle and bone with strength training,” Maynard says. “Maintain a proper diet and ensure proper rest to prevent overtraining. Everyone should be active at least 30 minutes a day on most days of the week. This is true for men and women alike.”