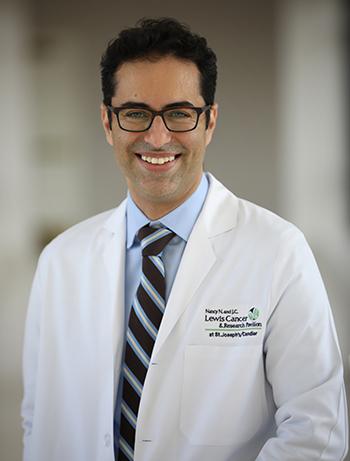 SJ/C: Why did you decide to become a doctor?

I don’t come from a family of physicians. In fact, none of my family members were in medicine. It’s one of the reasons why I wanted to do medicine because I’ve always been a contrarian. My dad was an engineer. My mom was a teacher and everyone else was in business. I decided I wanted to be a physician. I think a lot of my friends also wanted to do that. So that was my initial calling to be a physician.

SJ/C: Why did you choose oncology?

A lot of medical students don’t know what they want to become until they get into their residency, their internship. Every rotation you go into, you like something about it and you want to do that, but then you move on to another one and now want to do that.

I also found the reason I wanted to be an oncologist is because you not just seeing a patient but you are the main point of reference. I like that aspect of oncology that you are the hub in their care. That’s probably the reason why I became one.

SJ/C: Would you say improvements in cancer care are getting better for patients?

They are. We all want the pace to be much faster. We’re finding better cure rates for some cancers. Some are lagging behind. It also has to do with how much research money goes into each cancer. A lot of rare cancers, we are still behind because there’s not a lot of funding that goes into them.

Breast cancer, lung cancer leaps and bounds have seen improvements. I have wide-spread metastatic patients with lung cancer who are alive three, four, five years out. That would be unheard of just a few years ago. Definitely things are getting better overall, but not the same rate and pace with every cancer, but yes, big improvements.

SJ/C: Where do you see the future of oncology going?

Completely personalized medicine. It’s personalized cancer care; customized cancer care. Gone are the days when every cancer patient, if they have this type of cancer at this stage, all will get the same treatment because there was no way of teasing out how this person’s cancer is different than that person’s.

Now you can use molecular testing of the tumor. You can use testing of the blood. You can use genetic or heredity testing. You can combine that information and devise what is the best treatment for that patient, given their genetic makeup, given their tumor makeup and given what the blood tells you whether they are in remission or not. There’s so much information you can get so you are actually customizing their treatment.

That’s not just this patient or that patient but every patient, even the patients we see here in a small practice. Every patient that gets any sort of treatment whether it’s chemotherapy or immunotherapy whether it's IV or oral treatments, they all would have gone through that testing and diagnostic phase where they would have all those tests to figure out the best treatment for them.

SJ/C: Why is it important to you to serve some of our more rural areas?

Once you practice in a semi-urban or rural, small practice like this, you see those problems head on, and you realize that’s where I need to be to fill that gap. We can’t all be at MD Anderson (Cancer Center) or somewhere where everyone lives within 10 minutes of the center. What are you going to do if every oncologist goes and ends up in only big hospitals? People would have to drive one, two hours.

I’ve known patients who’ve had to travel more than an hour every day for weeks and weeks just to get their chemo, just to get their radiation. There’s just no way they are going to get good care when there are so many logistical issues. It’s a logistical nightmare to carry your cancer patient who is already tired and bruised to these treatment centers.

Treatment needs to be close to your home. It needs to be evidence-based treatment, which is the same level of treatment they can get in these large centers, but it can be provided in a small facility that is close to your home with your own oncologist. We know there are treatments that are required that may not be available because of infrastructure limitations.

We have patients who go to Savannah, for example, for a procedure or to see a doctor we don’t have here. We know when that has to happen, but not for everything. I think that’s why it’s important to have this clinic here (Hinesville) because it serves a great purpose. Most cancer care happens close to home, and it should be like that.

SJ/C: Do you have a moment when you thought this is why I became a doctor?

It is personal but there is a moment when I felt this is why I became an oncologist. My mom was diagnosed with lung cancer during COVID, and she passed away January 2021. When she got diagnosed, she wasn’t feeling well. I examined her and felt something was wrong. We went through all that treatment. Obviously, I was not her oncologist; I couldn’t be her oncologist, but I had a very good oncologist taking care of her, and I was overseeing everything that was going on so I could explain to her what was going on.

At that point, I felt maybe this is why I became an oncologist so I can take care of her. It’s a difficult time for anyone. I was her only son. She was a strong woman but she felt this might take her away. She wanted to take care of me longer and thought she wouldn’t be able to do that.

At that point, I felt whatever I could do for her would be a way to give back something. You can’t always pay your debts to your parents. At that moment, I did feel like this is why I became an oncologist.

SJ/C: What is some general advice you find yourself giving to patients?

I always tell them to educate themselves. When we see them, we teach them. I talk to them. The nurses talk to them; the infusion nurses talk to them. We provide them with material to read to help them understand what’s going on, and they know what treatment they are getting, and what it can do to them. That’s important because once your patient is educated, you see better outcomes. They will be more compliant and that’s very important in a place like this. That’s the most important thing to be a well-educated patient.

It’s hard – they have a cancer diagnosis and now they have to understand all these complicated things. As a doctor, you have to give it time, and you have to repeat things you’ve told them. You have to talk to them, not at them. And empathy – that’s the most important thing in any clinical practice, especially oncology, you have to have empathy. There are days when they are not compliant, when they don’t want to come to treatment, but that doesn’t mean they are not a good patient. It is hard.

I’ve seen it both as a physician and a family member taking care of a cancer patient. It is hard to get up from the bed, to get in a car or find transportation to go to the oncologist and get all the tests done. It’s hard to do that so you have to show empathy, and you have to provide support. We have a social worker here who helps with a tremendous number of things. It takes a whole team, and we have people here who can help.

Family: Married with one child
Hobbies/Interests: Being outdoors, especially the mountains, running, skiing