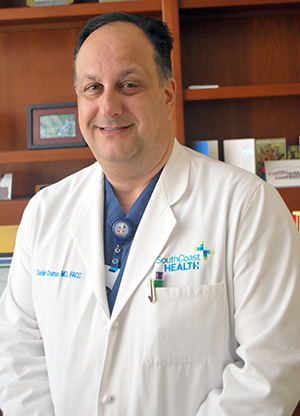 SJ/C: Why did you choose cardiology?

SJ/C: What is it about the heart that you find fascinating that led you to decide this is what you want to treat?

For family practice and even internal medicine, much of what they do is chronic care of chronic illnesses and prevention of illnesses. I think the doctors that do that kind of work should definitely be honored because it’s tough, tough work. I guess I have more of a cardiology mentality, which is, I want quick fixes. Let’s say someone came in with heart failure and we gave him Lasix and then the next day he felt like a million bucks. That’s great. Or say someone comes in with a heart attack, and we open up the artery and 15 minutes later he feels perfect. It still amazes me how quickly the human body can recover.

SJ/C: As a cardiologist what are some common procedures you perform or conditions you treat?

Cardiologists wear many hats, but we generally treat the common cardiology conditions. We’ll get asked to see anyone with high blood pressure, which is also called hypertension, or hyperlipidemia, which is cholesterol problems. We’ll see patients with chest pains whether they do or don’t have a history of heart disease, and we’re trying to determine if they do or don’t have blockages. If they have a history of coronary disease and a history of blockages, then we spend a lot of time and energy keeping those arteries open and preventing them from closing again.

We’ll see patients that have electrical problems with the heart, including things like palpitations, atrial fibrillation, atrial flutter. We treat the vast majority of patients, but then also triage certain patients to other experts who can handle particular niche findings a patient may have. My niche, which I happened to be trained with, is pacemakers and loop recorders.

SJ/C: How does something like a pacemaker help someone?

For instance, not here, but where I was before, there was an elderly woman who kept passing out and coming to the emergency room. While in the emergency room, there were no abnormalities found. This poor lady was being followed for several months, passing out every so often. Just by pure luck, this one time the ER was able to catch an EKG that showed she was in heart block. We were able to put a pacemaker in her and now she’s dancing the jig, feeling great. She literally says she feels like an 18 year old girl again. When you can identify those patients who really need it, they really do feel much, much better.

SJ/C: In your 30 years practicing cardiology, how has technology changed to improve what you do?

It’s dramatically different, and in almost every aspect of medicine in general, but certainly also in cardiology. When I started, we didn’t have stents. Stents were just coming on board. We were just doing balloons, which at the time was quite new. Stents kind of revolutionized everything. For patients with, let’s say cardiogenic shock, we’d use things like pressor agents, which were medications we’d use in the IV, which were OK effective. And then we went to balloon pumps and now we are using artificial hearts and Impella devices to help support the heart that is failing.

Pacemakers have become smaller. They last forever; the battery lasts much longer than it did when we started. Batteries tended to only last four to five years so those patients would have to come back and get a new battery put in. Now, they are lasting 12, 15 years, so patients are having fewer surgeries.

What do you do when someone has AFib and a risk of stroke and for whatever reason can’t take blood thinners to prevent the stroke? Now we can put a Watchman device in there that prevents a lot of those clots. Patients with bad valves are now getting TAVR. Medications have gotten better; people are living longer with heart disease, primarily because of the newer medications. It’s really been a dramatic improvement.

SJ/C: Do you have a moment or story in your career when you thought, ‘This is why I became a cardiologist?’

Almost every day, fortunately, we are able to help people. People come to you, scared and afraid, and they don’t know what’s going on. You do a few tests and you are able to explain to them what’s going on. It’s hard to pick out any one particular case. It’s one of the things that drives us, and certainly myself personally, to be a cardiologist, to be a doctor and be better every day because every day we make changes and differences in people’s lives just by making a diagnosis and giving them treatment.

SJ/C: What are some helpful tips you share with patients to improve heart health and try to prevent heart disease?

In the last 30 years the other big difference I’ve noticed is that patients are definitely living longer with heart disease. Ten years ago, 20 years ago, it was rare to have someone with heart disease live into their 80s. If you go into my waiting room today, you’ll see any number of 80 year olds, 90 year olds, and six, seven months ago, we had a 104 year old. Even myself, I’m amazed how some of these heart patients are clearly living longer and longer.

I think in large part that’s due to identifying that diet and exercise are two important components. When you talk to 80 and 90 year olds who are still alive with heart disease you find they are still active. They do a little walking every day; they do the treadmill or bicycle. They eat right; they don’t eat a lot of fast foods, greasy foods. They take their medications. The modern medications don’t have nearly the side effects that they did back in the ‘60s and ‘70s, so you find patients are taking the medications because they don’t cause side effects.

It’s also an overall positive attitude that these patients have. These are patients who want to work, stay active, remain independent, and they are willing to put in a little time and effort and take their meds in order to get that payback.

Family: Married to his high school sweetheart with four kids and a first grandchild on the way
Hobbies/Interests: Walking, bike riding, golfing, fishing, pickleball (a cross between ping pong and tennis)