As the one who is tirelessly dedicated to helping more than 3,000 co-workers live healthier lifestyles, Carol Barbee was honored as St. Joseph’s/Candler’s 27th James R. Lientz Humanitarian Thursday.

Barbee is a NP who currently serves as St. Joseph's/Candler’s WellPath Navigator. She not only assists co-workers in meeting their health and wellness goals but also helps them navigate their health benefit plans each year, guiding co-workers through a sometimes complicated process and saving them money at the same time. Barbee also helped create a Wellness Clinic for co-workers and their spouses to be seen for minor concerns quickly and at no cost. 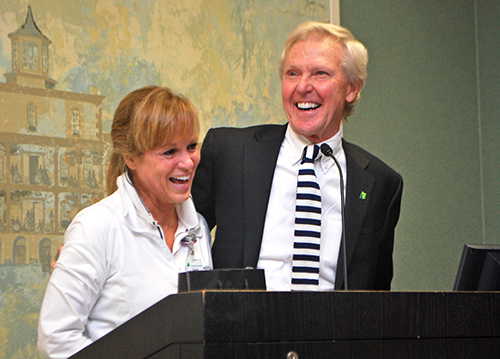 “Thank you to the Lientz family. Thank you to every person who I touched in any way,” Barbee said following the announcement. “Thank you to St. Joseph’s/Candler for the 34 years of putting up with me and allowing me to do what I do every day because I can tell you I love working with every single one of our co-workers and everyone in our community.”

“We have had the privilege of working alongside Carol for nearly 35 years,” said Paul P. Hinchey, President & CEO of St. Joseph’s/Candler. “And since the first day she arrived for duty, Carol has not wavered from her commitment to St. Joseph’s/Candler and its patients.”

The co-workers who nominated her describe Barbee as an energetic team player who thinks of others before herself and always displays grace under pressure.

One nomination read: “Carol Barbee is a wonderful example of St. Joseph’s/Candler’s mission and values. She is affable, approachable, friendly, courteous and genuinely concerned about the person she is engaged with, and that person’s health.”

Another co-worker added: “Every summer she spends a week at a summer camp for children who have diabetes. It is a time where children, who perhaps for the very first time, feel that they are not different from others because they all have the same disease. In all that Carol does, she brings a spirit of joy which is uplifting and contagious.”

Another said: “She spends hours in many departments meeting with co-workers face to face. Carol will go above and beyond to make sure that all of their needs are met.”

Barbee was among 71 co-workers nominated for the Lientz Award this year. As the 27th recipient, she will receive a $3,000 check, a cafeteria pass, a parking pass, a SJ/C watch, a massage certificate and the prestigious Lientz Pin.

Each year, St. Joseph's/Candler presents one co-worker with the award that reflects the humanitarian works of the late James R. Lientz, a former Candler Hospital Board Chairman and community activist. Recipients are nominated by their peers. A health system committee selects the recipient based on the candidate’s exemplification of the health system’s mission and values. The mission is “Rooted in God's love, we treat illness and promote wellness for all people." The values include compassion, quality, integrity, courtesy, accountability, and teamwork.