Finding The Kindness In Being Popular

Popularity. Peer pressure. Pimples. These and other middle-school problems caused great stress for young women and men in the past. Luckily for today’s generation, these old-fashioned teenage issues no longer exist.

Three years ago, as a middle-school student in Brownsville, Texas, Maya Van Wagenen was smart, sweet, and, in her words, a “social outcast.” As a nearly-friendless target for bullies, Maya’s only hope for survival was to sneak through her teenage years being seen, and therefore picked on, as little as possible. But an old, peculiar book ended up changing her life completely.

“My dad, who is a historian, found Betty Cornell’s Teenage Popularity Guide at a thrift store,” Van Wagenen says. “He bought it years before I was even born. It was written by a teen model in the 1950s.”

The book stayed in her father’s collection of historical novelties through various family moves, and was rediscovered when Maya’s parents were cleaning out her father’s office. They gave it to Maya, and her mother—knowing of her daughter’s struggles in school and of her dream to be a writer—suggested a kind of social and literary experiment.

“My mom said, ‘Why don’t you follow the book’s advice in eighth grade and write about what happens?’” Van Wagenen recalls. “At first I thought it was the worst idea I’d ever heard. I was already bullied and teased, and I thought that drawing attention to myself would make things worse. But I realized that the teasing would happen anyway, so I had nothing to lose. If anything, it would make for an interesting story.”

The chapters of the Teenage Popularity Guide included titles such as “Good Grooming,” “What to Wear Where,” and “Personality.” Van Wagenen organized the project to follow what she felt would be the easiest chapters first, completing them during each month of the school year. Not all of the tips—such as wearing a girdle—survived past their monthly timeline, but sound advice on poise, kindness, and healthy living did.

“The book’s advice on dieting and exercise didn’t have anything to do with fads,” Van Wagenen says. “It was balanced and structured, which is of course what people strive to focus on today.”

Small—yet actually huge—changes, like smiling at everyone and starting conversations with those who may not be friendly in return, took Van Wagenen far out of her comfort zone many times. As the year progressed, Van Wagenen found to her surprise that she did indeed become more popular. But by then, her idea of popularity had been redefined by Cornell’s underlying message.

“For me, the core of Betty’s advice was very timeless,” Van Wagenen says. “Her definition of popularity wasn’t based on a hierarchal structure built on bullying or peer pressure. Instead, she talked about lifting other people up, developing friendships and not excluding people, and presenting yourself in a way that made you feel confident.”

(From eighth-grade to today: Van Wagenen already had a sweet smile before discovering Betty Cornell's book, and by the time of her eighth-grade dance she had also embraced her glamorous side. Today Van Wagenen enjoys another successful experiment: a short hairstyle. And among her new friends in Statesboro, GA, is a feathered one, her pet conure Whoovy.)

When the year was over, Van Wagenen had a book’s worth of experiences in her journal.  She and her parents thought that this true-life coming-of-age story might resonate with others going through the same struggles. Penguin Group imprint Dutton Books agreed, and Popular: Vintage Wisdom for a Modern Geek was released in April 2014. As the memoir climbed up the bestseller list, Van Wagenen started hearing from people of all ages about how they connected with her book. 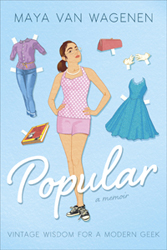 “For me, it’s not just for middle-school kids and teenagers,” Van Wagenen says. “I’ve received responses from adults, women and men, who have found the same sort of message for them and found it applicable to whatever they were going through…things like starting a new job, or sitting next to someone they hadn’t met and introducing themselves.”

“Popularity doesn’t have to based on something negative,” adds Van Wagenen. “It can be based instead on small actions by many different people, whether it’s helping that kid in the hallway who dropped his papers all over the floor or inviting the girl who sits by herself at lunch to sit with your group. Every one of us can be a powerful force for good in our school and our community.”

Van Wagenen believes the power of kindness can make a difference in all types of situations, including some she has shared with her younger sister, Natalia, who has autism.

“My sister was a character in my book, and writing about her helped me see some of her quirky actions in a new light,” Van Wagenen says. “Even on the difficult days when she was really struggling with a new task, or she was lashing out, or we couldn’t understand what she wanted, we could see how much she adds to all of our lives.”

Van Wagenen hopes that people will relate to her sister and others with autism in the same way that she encourages people to approach their classmates and peers in school: with understanding and a little patience.

“There is a lot more to a child with autism than behavioral issues,” Van Wagenen says. “They are clever and expressive, have senses of humor, likes and dislikes and favorite things. They are complete people.”

Van Wagenen and her family now live in Statesboro, Georgia.

“We really like it here,” Van Wagenen says. “This community has been so wonderful to me, even though I’m a bit of a transplant, and I see myself as part of it. They call me Statesboro’s own, which I absolutely adore.”

Despite being a best-selling author, Van Wagenen still faces the challenges of daily life in high school.

“High school is difficult in different ways than middle school was,” Van Wagenen says, “but I still do strive to apply the core message of Betty Cornell’s advice: be kind to people, remember to stand up for others, and stand up for myself.”


Learn more about Maya at mayavanwagenen.com.